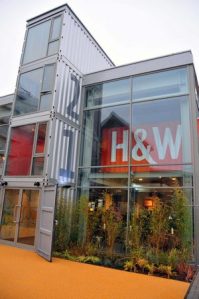 Another day another excuse for CAMRA self promotion, this time they are looking at the best designed pubs of the year, personally this is one of the few moments when i don’t groan at the CAMRA email, i actually like this category, i like interesting buildings and pubs so this really speaks to me because not every pub should be a fake Tudor chain pub after all. so this year CAMRA announced the winners and what a diverse set it was, we had everything from a railway conversion to a pub made out of shipping containers.
“The Pub Design Awards celebrate British pubs with truly memorable designs — whether it is a building that has been converted to a pub, a conservation project on a historical structure or a brand new build with cutting edge design aesthetics,” said CAMRA national director, Julian Hough.

“CAMRA congratulates the pub owners, architects, and designers who have contributed to these pubs being named the best in the UK.”

The competition judges, including CAMRA pub experts and a wide range of other heritage sector representatives, select only the best pubs, with 2013 being the first year in over a decade winners have been found for all six categories. the pub renaissance is continuing unabashed but with a new 21st century stance, time changes all things.

Dr Steven Parissien, one of the competition’s judges and an expert in pub design, said: “This year’s award winners are an engagingly distinct set of buildings and locations, ranging from a reborn rural village pub, via two delightful station watering holes, to two classic, back-street urban locals.

“Such diversity is exactly what the pub is all about, defining the life-affirming variety that lies at the heart of this marvellous and peculiarly British concept. And, as the icing on the cake, the judges were even able to present a new-build award for the first time since 2006.”

the winners of this years awards were the York Tap, on a York train station platform in a building converted from an old model railway museum, which one the conversion to a pub category.

The Albion Ale House, in Conwy, Wales, won the English Heritage conservation award and was joint winner of the Joe Goodwin award for best street corner local, the judges also applauded the those who restored this pub for the sensitive nature to which they restored the pub.

The new-build award was given to the Hall & Woodhouse in Portishead (pictured), an ultra-modern marina situated bar and restaurant constructed from recycled shipping containers stacked into a visually striking structure.

Another winner was The White Swan, in Shawell, a village pub “saved after years of decay”, which won the refurbishment award and which was chosen for the “attention to detail” that “takes it well beyond the normal pub makeover”.

there you have it folks, a look inott he ever changing and diverse world of that thing we call the local, i personally look forward to seeing what the futures brings for the pub.