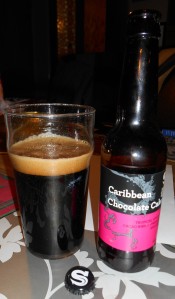 There’s nothing more you need to know about why I bought this bottle than its name. I mean, when you see something on your shelf called ‘Caribbean Chocolate Cake‘, you gotta bow down and worship the beer gods/goddesses – and kiss their feet, if possible – then rush to till and pay up, before every other beer-lover in the shop beats you to it. So that’s what I did. Actually, I lit a candle in a small portable beer-shrine that I have about my person as well. Sure, carrying it around makes walking a bit awkward, but beer’s my religion damnit!

The bottle says that this is, “…an outrageous creation. A dense rich stout, brewed with experimental hops, artisan cacao nibs… and then aged on trees of Cypress wood.” What’s of particular note is the use of the aforementioned ‘extra ingredients’ and the collaboration between two breweries, making it such a unique and passion-based thing. You may say that sounds a bit up itself, but, be honest, did you not just feel the hairs stand up on the back of your neck?

There’s a loose head, doesn’t stay around long, but had a nice dark colour to it [based on my experiences, the darker the head, the more special the beer!]. You can’t see anything other than blackness in this liquid; light cannot penetrate its beauty. 7/10

Aroma Big strong hits of dark chocolate, fruits [banana on finish?] and plenty of spice, sort of cinnamon, pepper maybe… I got the tamarind note, but I probably wouldn’t have remembered what I was smelling had the label not reminded me [I think tamarind’s a bit like honey with a peppery/chili kick…]. There’s maybe a touch of coffee, but not like most stouts I’ve ever had. There’s so much else going, on like vanilla and maybe a touch of sourness, like you might expect from a porter. 8/10

Taste Oh my word, that’s a real smooth, rich, full-bodied chocolatey flavour, with a wonderful tamarindy spiciness on the finish [not unlike chili hot chocolate, in other words]. I also get this woodiness – apparently the Cypress wood – which gives it a bit of smoky silkiness. So interesting, such big chocolate at the start, then a really long finish. I’m too distracted by the spice to get which fruits are going on, but it’s really pleasant for sure. 9/10

Value Please don’t kick off. I paid £4.25 for this. I think that’s absolutely defensible, seeing as how this is such a bold and unique experiential enterprise. Obviously, buying more than one becomes a pain, but for a one-off, I’d give it 7/10

Session Clearly, because of its strength and temperament , no-one’s ever going to look at this as a viable session beer. Having said that, there are many things that go in its favour as a session beer: it’s absolutely gorgeous, it’s as smooth as whipped clouds and it takes you closer to heaven. 7/10

This truly is an evocative beer. It’s not only evocative of the exotic places that the ingredients comes from, but it also brings to mind [and the tongue] the passion that the two breweries have for their art. I’d best stop writing this, I’m drooling too much at the thought of another one…