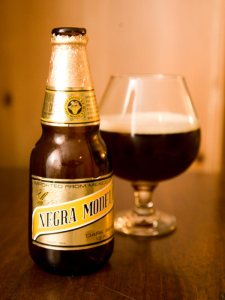 Welcome to our latest review, In our merry trip around the world we find ourselves stopping in Mexico today with one of the countries most popular lagers, This is also very popular in America and is the 2nd best selling import beer but does sales equal quality, that’s what we’re here to find out.

This beer came in a bottle and me being the person I am I poured it into a a glass, I don’t really like to drink out of bottles if I can avoid it. So when I poured it out I was very disappointed by what I saw, it looked very flat and there was no head to speak of and a beer without a head is just wrong on so many levels. Considering this is a dark beer this is just shocking, this looks like someone brewed it in a shed and we should know about that. If I had to describe this I would say that it looks like some dropped some black dye into a regular Modelo.

Smells like regular Modelo only without the lime, There was a bitter almost spoiled smell to it but the beer, which was surprising because the beer was very much in date.

This tastes how it looks, A very malty bitter taste with an even more intensely bitter aftertaste. Honestly this tastes worse than my first homebrew and my first batch of homebrew is not something we speak about in public, we only speak about that in hushed whispers. I was informed that this bitterness could be remedied with a lime but if you need a lime in your beer to overpower the original taste then I think your beer might not be that good, especially considering this is meant to be a German there was none of the quality i have come to expect from German beers.

I was informed that this beer cost 5 dollars, which is about £3.50 and that was in Mexico no less, this is an absolutely atrocious price for anyone to pay and I think it represents no value what so ever.

To achieve its unique taste, Negra Modelo uses a greater quantity of malt, the finest hops, a special yeast and the purest water.

That last bit may explain it, I’m not a fan of malty beers, There is nothing special here just a variation on a recipe.

In conclusion this will be my clearest review ever, avoid this beer at all cost. Its tastes very bitter with an even bitter aftertaste, this coupled with the sub par look, smell and atrocious value for money, I can say with every fiber of my being avoid this beer.